The Bloomsbury Group was a modernist collective of artists, writers and visionary thinkers in the early 20th century who changed the face of British art and culture forever.

The Avant-garde group named after the London location they began meeting in boasts a revolutionary membership with writers Virginia Woolf, Leonard Woolf, Vita Sackville-west and E. M. Forster and artists Duncan Grant and Vanessa Bell, all part of this boundary-pushing collective.

But why did this forward-thinking metropolitan set leave bohemian Bloomsbury for Lewes, Sussex?

Virginia Woolf was the first of the group to abandon London, though not fully until her city home was destroyed during WWII. In need of the kind of solitude that only the countryside could offer, the author found a property in Firle and started to frequent the house from January 1911. The lease on the house was short, but while Woolf stayed there, she called it 'Little Talland House' in reference to a childhood home of hers in Cornwall.

Asheham (or Asham) House, near Beddingham, East Sussex. The photo was taken in July 1914 and is from Virginia Woolf's Monk's House Photograph Album I. - Credit: Public Domain

In October 1911, Woolf and her husband Leonard moved on to the now-demolished Asheham House. During the five years they used Asheham as a creative retreat and countryside escape, Woolf wrote her first novel, The Voyage Out, completed much of Night and Day and kept an extensive diary that would later be published posthumously as part of A Writer's Diary in 1953. Woolf exclaimed in a diary entry on May 5th 1919, "Oh, but how happy we've been at Asheham! It was a most melodious time. Everything went so freely; – but I can't analyse all the sources of my joy".

After vacating Asheham, the Woolf's took up a brief residency at The Round House in Lewes before finding Monk's House in 1919. They purchased the house for £700 and found themselves extending the property in 1929. Many of Virginia's greatest works, such as Orlando, Mrs Dalloway and To the Lighthouse, were written while the couple spent time at the property. Also, many of the Bloomsbury Group would visit Virginia at Monk's House, including Vita Sackville-west, who was Woolf's lover and muse for 10 years. Sackville-west was the inspiration behind Virginia's masterpiece Orlando, which has been called "the longest and most charming love letter in literature".

The Woolf's gradually spent more and more time at Monk's House, and after their London home was bombed in 1940, it became their permanent residence. In this period, Virginia wrote her final novel, the critically acclaimed Between the Acts, which was very much inspired by the Sussex village she lived in. The following year after battling with mental illness her entire life, Virginia committed suicide by filling her pockets with stones and wading out into the River Ouse. She was survived by Leonard, who continued to live at Monk's House until he passed away in 1969.

Monk's House and its beautiful country garden now belongs to the National Trust. Step inside the house, and it feels like the famous literary couple have only stepped out for a stroll as the property has been beautifully preserved. In Virginia's room, you can find her complete collection of Shakespeare books and at Leonard's desk a scattering of letters. The eclectic decoration and impressive art collection are a feast for the eyes. And much of the works on display were created by members of the Bloomsbury Group on their visits, including the customised tables in the lounge and kitchen areas.

Leonard Woolf transformed the garden at Monk's House from a ruin into a stunning paradise to which Virginia said, "Our orchard is the very place to sit and talk for hours". Nestled in the garden is the small writing lodge where Woolf wrote her most famous works, including novels, essays and diary entries; she would also sleep in the lodge on beautiful summer nights.

To experience the magic of Monk's House and to step in the footsteps of Virginia and Leonard Woolf, book a visit on the National Trust website. Picnics are welcome on the grounds, and dogs can enter the gardens on a short lead.

In 1916, Woolf coaxed her sister and fellow Bloomsbury member Vanessa Bell out of London to take up residency at the nearby Charleston Farmhouse in Firle. The household was rather unconventional as Vanessa, who was in an open marriage with art critic Clive Bell, moved into the property with her children by Bell and her dear friend and occasional lover Duncan Grant, who in turn invited his lover David Garnett to join them. The famous witticism about The Bloomsbury Group from Dorothy Parker, “they lived in squares, painted in circles and loved in triangles”, seems to very much apply to the Bell's blended family.

The Charleston Farmhouse era was a period of intense creative symbiosis for Bell and Grant. They produced numerous paintings, and much like the Woolfs' Monk's House, Charleston Farmhouse became a hub for the Bloomsbury Group with frequent meetings taking place at the country house, many of which would take advantage of the glorious Sussex summer weather. 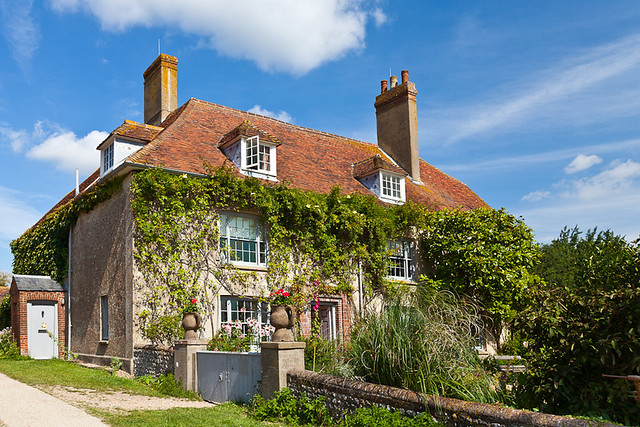 Charleston Farmhouse is perhaps one of the most intriguing properties open to the public in England. The interior is eclectic and mismatched, and many of the walls are adorned with quirky paintings. It would seem that the house itself was a giant canvas, and nothing was off-limits to decoration.

There are always exciting cultural events at Charleston Farmhouse, from exhibitions to art classes and author talks. There's also an onsite cafe where you can relax and ruminate in or discuss art over a cup of coffee. Book your visit to the house, gardens and upcoming events here.

Why was Sussex split into two counties?

Win a luxury break at The Draycott Hotel in Chelsea

Where to go wild swimming in the Cotswolds